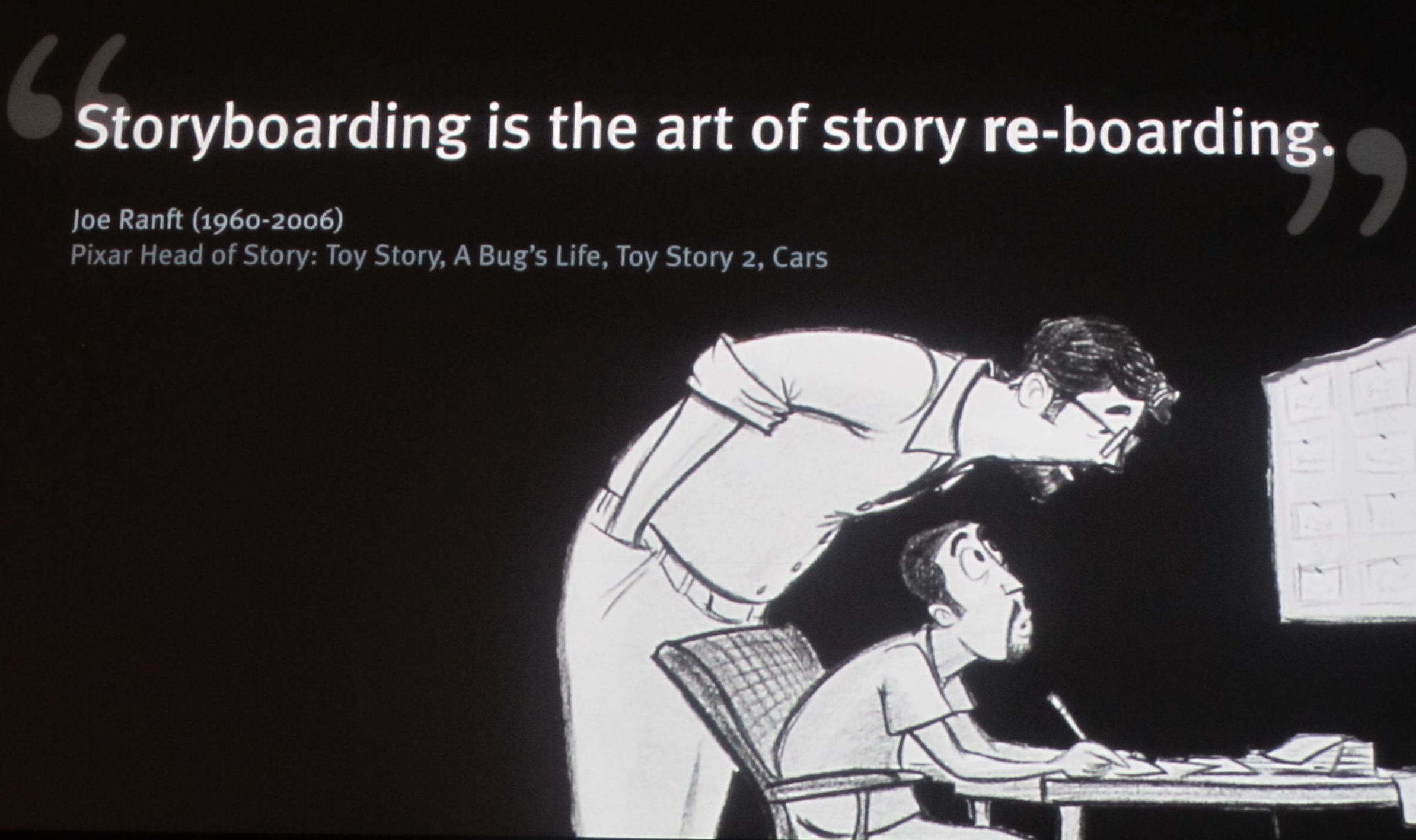 10:00 – CET: Pixar’s Michael B. Johnson about Fun in design
Next tot he „hard fun“ aspects which Pixar is trying to culture, there was one special case from Michaels speech I kept in mind. He was asking how toys (refering to Toy Story 2) can be more emotional and therefore cry? Toys can speak, they can walk and even jump but we’ve never seen a toy cry. „So how, from a designers perspective, can you make a toy cry?“, he asks. The answer dropped in with a simple trick: Pixar storyboarders placed the toys behind a window, the camera looked from the outside and while it rains, the shadows and reflections of the water on the window were mirrored onto the toy’s face. It’s so simple and describes best how we have to challenge and request impossible solutions.

“Quality is the best business plan”, or as another colleague put it “Pain is temporary, suck is forever”. The Pixar family very much keep its mantras in mind, always striving to do things better. American film & theatre director Gower Champion has been quoted as saying “Do something so we can change it”. An open minded workspace is Pixar’s success for these amazing pictures. Find out why:
[youtube=http://www.youtube.com/watch?v=sogdwFNbvSk]

He closes his speech with „Pain is temporary, suck is forever“. Michael, thanks for changing points of view and this kind of inspiration!
Read more about Michael B. Johnson at the Typo London Blog.

16:00 – CET: Lawrence Weiner „I can be friends with designers“ – A great talk about life 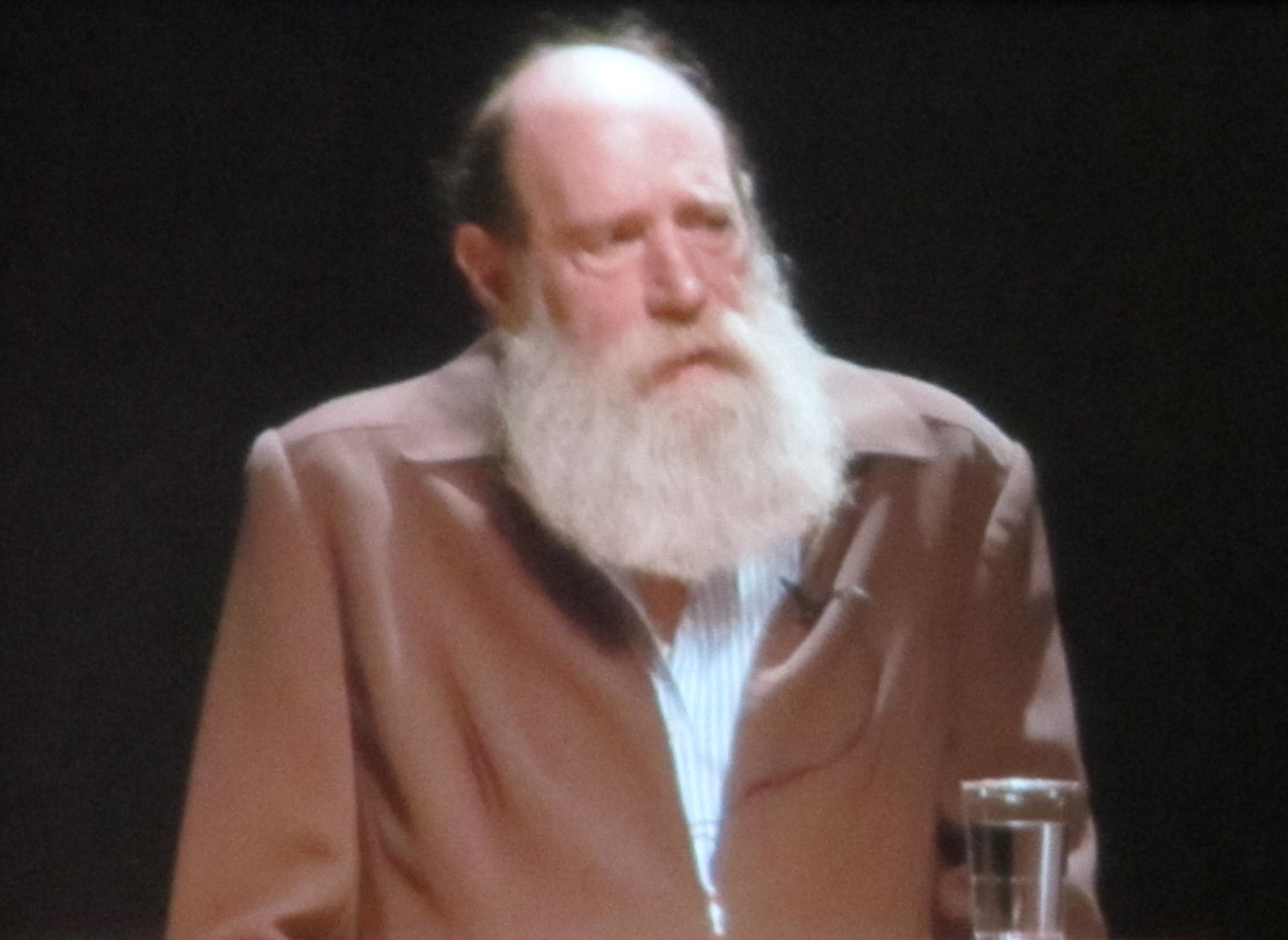 We’ve all been expecting more about Laurence Weiner’s work and his great speeches about fucking up peoples life. He’d surprised all of us. As an old Amercian socialist, he spoke about his life, the way he sees and understand things. What it means to be a human. I was looking for a video that descirbes Weiner’s democracy best:
[youtube=http://www.youtube.com/watch?v=puEMu8JBu00]
I’m live blogging this but going back into this article, I must say that Weiner’s sentences sustained impressed us here. 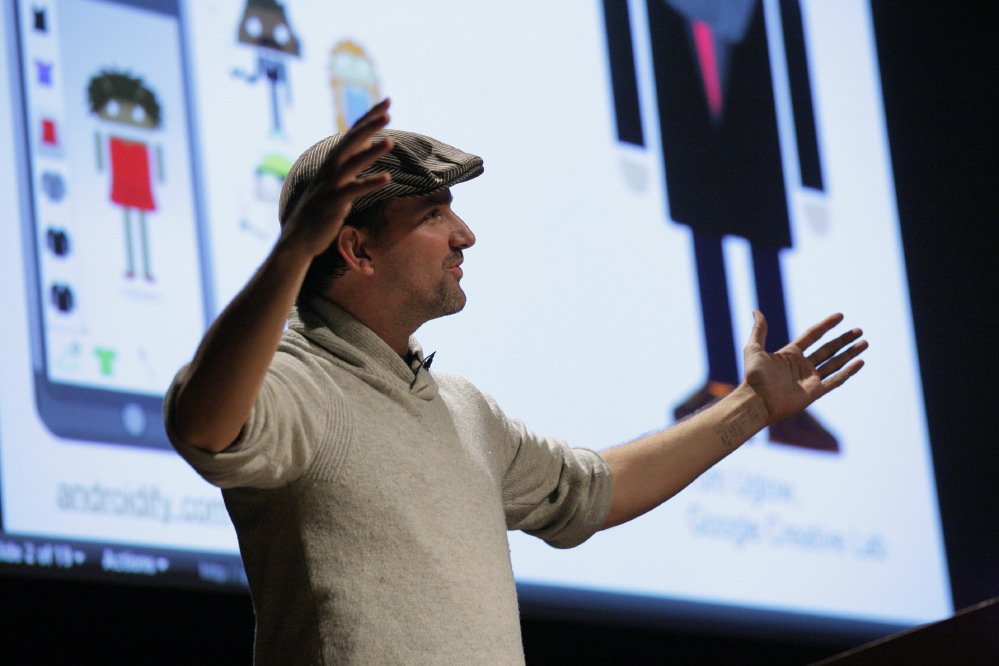 Tom Uglow, creative director at Google Creative Labs knows as he says from everything just a tiny piece and shared some of these slices with us (sounds familiar to me ;). A few things I’d like to share with you from a cerative perspective:
One of our “forced” design accidents was the Android character, which just happened by accident, by playing with the tools, doing the next logical thing. And it became iconic.

He continued with some thoughts about creativity and that creative directors should be about story telling about the people using their services. Google uses the narrative way of describing things and services rather than showing how the work (the descriptive way). A good example:
[youtube=http://www.youtube.com/watch?v=nCgQDjiotG0]

He uses more of Google’s own ads as example: „The power of digital – the broadcast thing is kind of dead – is so amazing. Using Youtube for own marketing to crowdsource a film about Youtube is out intention“ he says in his speech and continues with „Designer should design for every single person with each single backgrounds and do not think about THE one person that fits all!“

…and the vision of city, urban art and how IBM makes people THINK: