Spooky: It’s invisible, but on the picture! 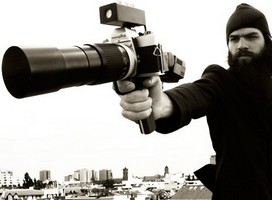 This gun camera adds grafitti to peoples pictures without seeing them before taking the picture! Spooky. This is called “Image Fulgurator”, half guerrilla-art stunt and half homemade-gadget awesomeness. Berlin based artist Julius von Bismarck uses his oddly named camera-mod to project images onto street furniture where they appear in the photos of strangers, but remain invisible to their eyes.
[youtube=http://www.youtube.com/watch?v=EAX_3Bgel7M]<a See the video on YouTube.

Read the rest on Wired.com